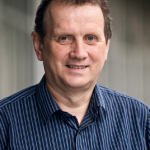 Failure to provide naloxone at the point of release for most prisoners is putting lives at risk, says John Jolly.

Read this article in DDN

Those leaving prison having had an opiate problem are seriously at risk of having a life-threatening overdose or dying as a result of one. Both Public Health England (PHE) and the government have been clear in their recommendation that all local areas need to have appropriate naloxone provision in place. However, prisons have so far failed to implement provision at the point of release across much of the estate, and this is putting lives at risk.

Blenheim workers have found that it’s rare for any of our service users to be released from prison having been provided with naloxone, medication that is literally life-saving in the case of overdose. PHE’s strategy to reduce drug-related deaths identifies discharge from prison as the point of maximum risk of overdose and maintaining contact with treatment services as a key intervention to stem the rise in drug-related deaths. 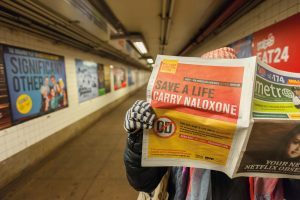 The NHS is responsible for provision of treatment services in prison, including naloxone, but refuses to take a national view. At one point the NHS even argued that as the prisoner would use naloxone outside of the prison it was not their responsibility, and each local authority should arrange to fund, provide, and negotiate arrangements for the supply of naloxone at the point of release. To expect them to do this with more than 100 prisons is something that anyone can see is ludicrous, but currently the NHS says it is for local NHS areas to decide.

It has proved difficult to get NHS England to provide clarity about what is going on as they are reluctant, or unable, to do so when asked. Below are a couple of replies given to questions by Grahame Morris MP that will have been prepared by officials for the government’s response.

Question: To ask the secretary of state for health and social care, how many and what proportion of prisoners with a history of opioid misuse were provided with naloxone when released from prison in the latest year for which information is available; and from which prisons those prisoners were released.

Reply (May 2018): Information on how many prisoners are provided with naloxone when released from prison in England is not currently available. This data is due to be published in 2019.

Question: To ask the secretary of state for health and social care, if he will bring forward legislative proposals to make the supply of the opioid-overdose antidote naloxone to all at-risk prisoners upon their release a mandatory requirement for prisons.

Reply: Naloxone has a vital role in saving lives and the government is committed to widening its use in England. There is no national programme that mandates the supply of naloxone for at-risk prisoners on their release, and the government does not have any plans to bring forward legislation to make this a mandatory requirement for prisons. The commissioning of substance misuse treatment for prisoners is the responsibility of health and justice commissioning teams in ten of NHS England’s area teams, supported by a central health and justice team. The government expects commissioners and providers of substance misuse services in prisons and in the community to work together closely in respect to prisoners being released from custody to ensure seamless transfers of care.

So according to NHS England they have not got a clue about what is happening and their best estimate is they may know in six months time. Or, as I suspect, they are putting off releasing the information and will do so for the foreseeable future. How long does it take to ask prisons the following three questions:

1)  Are you providing naloxone at point of release?

2)  Are you providing naloxone and overdose training?

3)  How many naloxone kits have you given out?

Well let me try and help them out a bit. There are currently at least 36 prisons in England and Wales claiming to give out naloxone on release – a low percentage. There may also be others that I and my sources are unaware of, but just because someone at a prison says they are providing naloxone it doesn’t mean they are handing out many, or any, kits. In Scotland, where all prisons are supposed to be providing naloxone at the point of release, the position is depressing – in one prison in the last year only 24 kits had been provided, while in another none had been handed out. Operational difficulties are often cited as the reason for this, a common excuse that covers most prison failures. 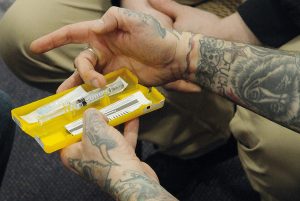 On the NHS website it says that NHS England health and justice teams commission to the ‘principle of equivalence’ which means that the health needs of a population ‘constrained by their circumstances are not compromised’ and that they receive an equal level of service as that offered to the rest of the population. It goes on to say that NHS England health and justice commissioning supports effective links with CCGs and local authorities to support the delivery of social care within secure settings and the ‘continuity of care’ as individuals move in and out of them.

Failure to provide naloxone at point of release, along with the breakdown in continuity of care – documented in response after response to the ACMD in relation to custody-to-community transitions – demonstrate a clear failure to live up to these statements. I am starting to wonder how much stigma and prejudice underlies this – I am sure diabetics requiring insulin do not suffer in the same way.

So to recap, why does naloxone at the point of release matter? A recent large scale Norwegian study examined the deaths of all prisoners in the first six months of their release over a 15-year period – the sample comprised 92,663 prisoners released a total of 153,604 times, and the study found that overdose was the most common reason for death at every time period within the first six months post-release.

During the second week the total number of deaths approximately halved, with overdose deaths accounting for 68 per cent of all deaths. During weeks three to four and months two to six, overdose accounted for 62 per cent and 46 per cent of all deaths, respectively. For several years, Norway, like the UK, has been ranked as one of the European countries with the highest rates of overdose mortality, often explained by high rates of injecting drug use and an ageing poly-drug using population.

Recent UK research also found that the first week following prison release was the period of highest risk of mortality with drug-related deaths the main cause.

By now it will come as no surprise when I say we do not have an accurate figure of the number of drug-related deaths of recently released prisoners in England and Wales. Please NHS, help sort this out and start preventing these needless deaths.

The uneven provision of naloxone by prisons is representative of wider barriers to continuity of care from custody to community, says a new Blenheim report (see news, page 4). High death rates of opiate-dependent prisoners post-release and high dropout rates in community treatment are ‘symptomatic of critical failures in the system’, says Failure by design and disinvestment: the critical state of custody-community transitions, prepared by Russell Webster.

Funding cuts across the criminal justice system and changes to probation services mean that ‘quality, supported transitions’ are now the exception rather than the rule, the document states. One key area of concern is the depleted funding for the Drug Intervention Programme (DIP), which had provided the mechanism to ensure joined-up transitions, and the report urges the government to return to a ‘fully funded and sustainable case management approach’, along with naloxone provision for those at risk, in order to avoid further needless deaths.