We need to dig deep for inspiration and redouble our efforts against reactionary policies, heard this year’s HIT Hot Topics. DDN reports. Photography by nigelbrunsdon.com

Let me take you to Columbia,’ said Sanho Tree, fellow at the Institute for Policy Studies and a director of its Drug Policy Project. ‘Here farmers grow coca because it makes economic sense to them,’ he said. ‘They don’t stand a chance of growing other crops and coca is one crop that doesn’t require much infrastructure.’ Yet the government had been trying to eradicate coca for decades, primarily through crop dusters – aircraft that sprayed the area with a potent form of Roundup, a herbicide that caused rashes, vomiting and illness as well as the death of crops and animals.

The drugs that cost pennies to produce would be worth thousands by the time they hit our streets, thanks to the politics of prohibition, which inflated their value at each risky link in the drug trafficking supply chain, he said.

Then there was the ‘pogrom’ mentality – ‘if you get rid of these people, it will be ok’ – as seen in the Philippines, where Duterte had presided over 30,000 deaths.

Meanwhile President Trump’s wall was failing to have any impact on preventing drugs from crossing the border between the US and Mexico, with the many other smuggling methods including tunnels, planes, torpedoes bolted under freighters and drones – not to mention the four-inch gaps between slats that enabled drugs to be handed through the wall itself.

So how do we end up with such reactionary policies? ‘Because they sell’, said Tree. ‘People want easy answers.’ But we needed to step back from the ‘madness’. ‘We need to ask why we do what we do,’ he said.

‘We’ve built a fundamentally sick society, and when I think about this in terms of drug use, I wonder if it’s a predictable response to a world gone mad,’ he said.

According to Pavel Bém, commissioner at the Global Commission on Drug Policy, we had become used to ‘acting only on the surface of the problem’. As former mayor of Prague and drug czar of the Czech Republic, he had been instrumental in bringing about a period of decriminalisation.

‘There is evidence that drug policy is wrong and needs to be reformed,’ he said. ‘But this is not enough. We need never-ending passion. For good policy reform we need heroes.’

The hero in his country, at the time, was former president Vaclav Havel, he said. ‘At this time I was the drug czar. He asked me, “why aren’t smokers in jail?” It was the human rights angle, the ‘emotional momentum’ that introduced harm reduction services, including needle exchanges and outreach.

As president of Caso Drug Users Union, Rui Coimbra Morais had witnessed the evolution of the decriminalisation model in Portugal – its progress and its paradoxes.

‘The country is not a paradise for users, but it’s better,’ he said. ‘But stigma doesn’t change overnight, globally and from society.’

We were so busy ‘creating illusions that we fit and should be normalised’, but we needed to change these narratives. ‘I felt all my life that I don’t fit – and now I don’t want to fit,’ he said. The important thing was to get back to basic things – the knowledge that you are not alone. ‘We are many, we are not alone,’ he said. ‘We have to connect much more with the levels of freedom I find in different places.’

Biz Bliss from The Psychedelic Society suggested that ‘sometimes we need a reboot, remembering what’s important, connecting with the self.’ She invited her audience to ‘connect with the heart space’, by looking deep into the eyes of the person (probably a stranger) next to them.

The idea was to put people in vulnerable situations where they were forced to be uncomfortable. ‘We try to create spaces to remember what it’s like to connect,’ she said.

Through a ‘beautiful retreat centre’ north of Amsterdam, she tried to create the ‘perfect set and setting’ through an intimate sharing circle with music, enhanced by taking mycelium truffles in ginger tea. Once people learned to get familiar with their feelings, including grief and pain, the idea was to learn to ‘use this space’ without psychedelics and ‘access the experience’.

The idea that we can support each other through talking was not isolated to a retreat. Katy McLeod of Chill Welfare met many people in festival settings who were experiencing intensive psychedelic interventions. The network of volunteers offered practical and therapeutic support and ‘de-escalation’, which involved ‘being careful around questioning, humour, refocusing and distraction’.

The purpose was to keep people safe but was also an opportunity for early interventions – a chance to talk to relevant drug services. The specialist interventions included a dedicated mental health response team, which appreciated that people sometimes had an experience they hadn’t expected. They supported them ‘in that moment’ and worked holistically as a team of volunteers to provide a safe space.

These initiatives were invaluable in a climate of massive cuts to drug services, and equally important was the progress being made in some areas by police and crime commissioners. Megan Jones, policy manager for West Midlands PCC said reducing harm was a key driver to strategy, alongside reducing crime and cost to the community. Birmingham officers were now saving lives through carrying nasal naloxone and their eight-point recommendations included heroin assisted treatment (HAT) and drug consumption rooms, alongside diverting people away from the criminal justice system. Liaising with schools and colleges was creating a new dialogue with young people.

Lizzie McCulloch of Volte Face also emphasised the power of talking in ‘mobilising and engaging’ and inspiring change. Their campaign to legalise cannabis had engaged people from all affiliations. ‘People underestimate how influential it is having these conversations,’ she said.

The positive developments explored at the conference – which included research on agonist medications for treating problematic stimulant use, interesting research on microdosing, and promising progress on drug-checking initiatives that led to harm reduction interventions – gave a strong flavour of optimism that prompted the conference’s creator Pat O’Hare to say ‘the tide is turning on harm reduction’.

But the event’s purpose was also to remind us to redouble efforts against the backdrop of an appalling – and preventable – drug-related death rate.

Prun Bijral, medical director at Change Grow Live, was invited to give a provider’s perspective and acknowledged that, with the current public health crisis, ‘we are in a very hostile system for people who use drugs.’

The ‘whole person’ approach was crucial he said, and this relied on using people’s experience. A lot of the data capture in this sector was meaningless, but a good system relied on ‘bottom up’ feedback – learning about, and from, the service user’s journey.

‘Data is really important, but it’s about making space for people to get together, off the hamster wheel, to collaborate,’ he said. ‘We need to do things better, work better together, be open and share what we have, and welcome all perspectives.’

‘Harm reduction saves lives, but what we need is more perspectives’ concluded the session’s chair Gill Bradbury. ‘There are lots more tools in the box – let’s use them.’

NO TIME TO LOSE

‘We are not ahead of the curve by a long shot,’ warned Mick Webb, project coordinator at CDF Bristol.

Imagine what the drug-related death figure would be if naloxone wasn’t about.’

‘We can all talk, but 12 people in the UK will die today,’ said George Charlton, leading the event’s naloxone workshop. ‘Only 16 out of 100 people using opiates across England are given take-home naloxone. If we’re not giving naloxone, we’re giving the message that it doesn’t matter if you die.

Locally, in the north east – ‘the drug death capital’ – their peer network had been helping to create momentum that things were changing.

‘There’s a palpable sense that harm reduction is returning,’ he said. ‘So let’s fucking do it. Overdose is reversable, death is not.’ 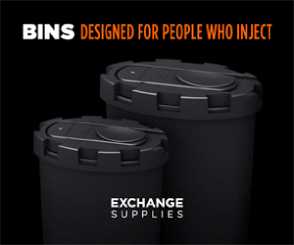