The proportion of prisoners who say they have developed a drug problem while in custody has doubled to almost 15 per cent since 2013-14, according to a report from the Reform think tank. 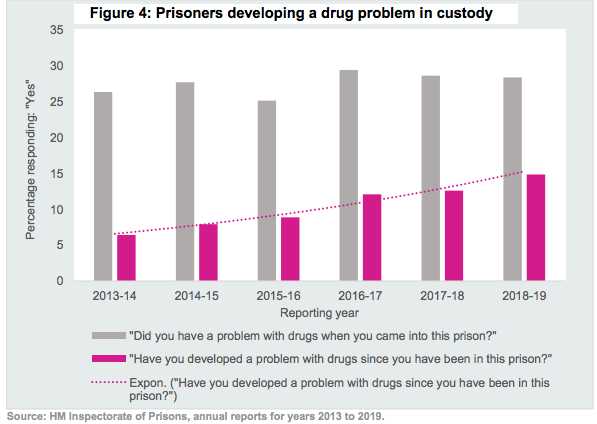 ‘The presence of drugs, especially psychoactive substances, has a significant impact on levels of violence across the estate,’ says The prison system: priorities for investment, with levels of prisoner-on-prisoner and prisoner-on-staff assaults increasing by 30 per cent since 2016. In the year to March 2019, 17 percent of drug tests on prisoners were positive, the document adds.

Since the government pledged to address safety and other issues in its Prison safety and reform white paper (DDN, December 2016, page 5), progress has been ‘poor’ in a number of key areas, says the report. In addition to worsening rates of violence and drug misuse, incidents of prisoners self harming have increased by 65 per cent since the white paper’s publication and the rate of operational prison officers leaving the service has risen by a third.

Among the report’s recommendations are that the Ministry of Justice considers banning or reducing the use of short custodial sentences to help ease overcrowding, and sets aside £900m to address maintenance issues and so ‘improve standards of decency and safety’

‘From our experience running rehabilitation programmes in prisons across the UK, we agree with Reform’s report that the drug problem in custody is getting worse, with more prisoners developing a drug problem inside,’ said Forward Trust chief executive Mike Trace.

‘More prisoners are getting pulled in to the prison drug market, and there are fewer opportunities for them to use their time in prison to turn away from drugs and crime. This results in unmanageable institutions, and high rates of post-release reoffending. We know how to reduce drug demand in prisons and reoffending, but current policies continue to starve these proven strategies of funding and support, and preside over prison conditions that push prisoners towards drugs, not away.’