The opening session of the tenth DDN service user conference, One Life, mixed stark reflections on drug-related deaths and budget cuts with powerful exhortations to make sure the service user voice was properly heard.

‘Looking back over the last ten years, there’s been so many cuts that I don’t know what’s left to cut,’ Chris Robin of Janus Solutions told delegates as he introduced the opening session of One Life. Service users, however, had come a long way in those ten years. ‘They know want they want, and they have a voice,’ he said.

There had been far more money in the system a decade ago, he told the conference. ‘But I’m not sure we made the most of the money we had, and maybe we’re paying the price now.’ Services had been forced into ‘unhealthy competition’ with each other, which inevitably meant that clients were losing out, while drug workers had huge caseloads and were effectively becoming mental health counsellors, housing officers and more in addition to their core work. ‘Where do they get the time to actually talk about the client’s drug use?’ What’s more, the workers themselves were also feeling extremely insecure about their future, he stressed.

‘We’re seeing so many services being re-commissioned – there’s a real need for stability,’ he stated. ‘And again, the honest question we have to ask ourselves is, “when the money was available, did we do the right thing?”’

The financial climate had forced services to be more creative and innovative, however, and to tailor their designs to the needs of their clients. ‘It’s no longer possible to get away with just offering generic services. We talk about the evidence base, but we have to open the door and create space for new kinds of evidence.

‘There’s nothing negative about service user involvement, but we can’t allow a situation where service users are running the projects while the profess­ion­als sit back and let them get on with it,’ he continued. ‘We’ve got to give workers the power to be more authentic, and to relate back to what they see.’

One of the most disturbing developments in the decade since the first DDN service user conference has been the increase in drug-related fatalities in the last few years, delegates heard.‘At the ACMD [Advisory Council on the Misuse of Drugs] we’re really, really worried about the trends we’re seeing in drug-related deaths,’ chair of its recovery committee, Annette Dale-Perera, told the conference. ‘We advise the govern­ment. They don’t listen to us most of the time, but we still tell them things.’

The ACMD had carried out work on opioid-related deaths because it was able to say things that Public Health England (PHE) couldn’t, she told delegates. ‘However, the data is not very good – it’s based on coroner reports and it’s not a consistent system. The data coming out of Wales is much better than what’s published in England and Scotland.’

There had been 1,842 opioid-related deaths in England alone in 2015, she told the conference. ‘That’s massive.’ Previously, the numbers had been increasing until 2001, the point at which more money started to come into the system and deaths had started to come down – ‘a direct correlation’, she said. The ‘heroin drought’ of 2009 to 2011 had also meant fewer fatalities, but the death toll had been increasing since then, she warned.

‘Deaths in the under-30s have been going down – that’s good, that’s a success story – but deaths among the over-40s have been going up exponentially. Far, far more men are dying, but the numbers are creeping up among women as well.’ The vast majority of those dying were either not in treatment at the time, or had never been in treatment, she stressed. ‘Treatment is protective.’

Some of the deaths were undoubtedly being driven by supply – ‘deaths go down when the heroin supply goes down’ – and, worryingly, Afghanistan had seen ‘bumper’ opium crops recently (DDN, November 2016, page 4). However, many of the fatalities were the result of the impact of long-term heroin use and its associations with chronic health conditions, poor diet, smoking and heavy drinking.

Someone who had been smoking for 25 to 30 years would have a substantially reduced lung capacity, she said, which inevitably meant they were more likely to stop breathing in an overdose situation. ‘Their livers are likely to be compromised as well, so it’s the combination with poor health and with mental health issues on top. Some people have got to the point where they don’t really care enough if they stay alive or not, and some deliberately overdose.’ 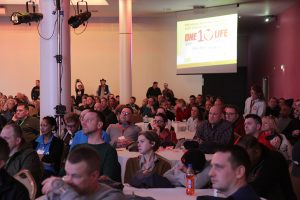 Growing social deprivation was one of the key drivers, she warned, with deprived areas disproportionately suffering the effect of government cuts. ‘So it’s a double whammy.’

The ACMD also felt ‘quite strongly’ that another factor driving the deaths was constant re-commissioning, she said. ‘It’s creating transitions. People are being handed over from service to service, with different philosophies, different key workers, and the possibility of falling between the gaps.’ More cuts would inevitably be on the way, she stressed, with funding for treatment likely to reduce by 30 per cent by 2021. ‘We’ve lost harm reduction services. I’m very supportive of the recovery agenda, but we need harm reduction as well.’

The ACMD had told the government that it needed to do more to reduce supply, but its recommendation was also that levels of OST coverage must not be reduced. ‘We obviously need more coverage, not less,’ she said, but it was important that this went hand-in-hand with more action to prevent overdoses, such as naloxone provision and training, supervised injection facilities, and more to improve the physical and mental health of drug users.

‘You have a right to non-discrimi­na­tory treatment and healthcare,’ she told delegates. ‘Challenge these cuts, use your organisations, challenge discrimination!’

‘Important though it is to get the messages out, it’s more important to mobilise people who can make things happen – the people in this room can do that,’ agreed head of Collective Voice, Paul Hayes. ‘You should get your voice heard, and challenge discrimination. Particularly in a local authority-led environment, if you don’t make your voice heard you won’t get the results you want.’

There was a moral obligation on everyone to concentrate on these ‘early avoidable deaths’ he said, but stressed that it was ‘not just’ about overdoses. ‘There’s a far larger number of hidden cases – people with compromised livers, lungs, hearts.’ In terms of practice, therefore, it was vital to ‘identify, integrate, intervene and engage’, he told the conference.

‘You need to identify the people most at risk. Treatment providers know where they are, and we need to spend more time and resources on them. We also need to make 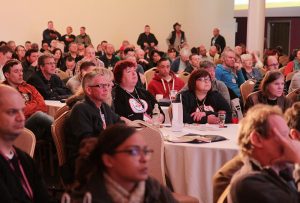 sure there’s much better integration between treatment services and the rest of the NHS.’ Links had become fractured through a lack of integration in commissioning, he said. ‘You can’t take the background pressure on NHS services out of the equation, but there’s no reason why we can’t engage with this and challenge those fractures.’ The fractured system between commissioning for treatment in prisons and in the community was also putting people at risk, he said.

‘The first thing that needs to happen is to engage with people outside the system,’ he said. ‘Our system has a penetration of 60 per cent – one of the highest in the world – but we need to engage with the other 40 per cent.’

Clearly, all of this was in the context of ‘very, very heavy’ cuts, which were only going to get worse, he stated. ‘The most important thing to hang on to is to protect access to evidence-based treat­ment. It’s interesting how the shiny new tends to drive out the boring old. The stuff that gets the headlines is consump­tion rooms and naloxone – they’re both important, but one of the reasons things are being cut is that drug treatment is not a natural fit with public health.’

Public health was ‘population-based’ he said, and the fact that the death tolls for tobacco and alcohol were far higher than for drugs inevitably meant they would be a higher priority. ‘But you have voices. You’re at risk. Your friends and family have died. These stories need to be heard – this has to be in the mix. I hope together we’ll be able to make some impact.’