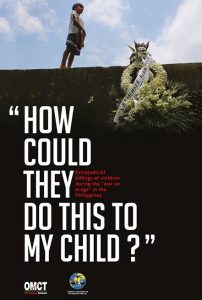 More than 120 killings of children and young people were carried out in the Philippines between July 2016 and December 2019, according to a report by the Geneva-based World Organisation Against Torture (OMCT) and the Philippine Children’s Legal Rights and Development Center. Just under 40 per cent of the killings were carried out by the police, with the remainder by ‘unknown individuals, often masked or hooded assailants, some of them with direct links to the police’.

The document – which is based on interviews with families, witnesses and local authorities, as well as official documents – states that the children’s ages ranged from just 20 months up to 17. In one case a seven-year-old boy was killed simply because he had witnessed the murder of an adult. The organisations estimate that the total number of extrajudicial killings since the country began its ‘war on drugs’ under president Duterte four years ago is just under 30,000 – with just one police officer convicted – while at least seven children have been killed in the first three months of this year.

The children’s deaths documented in the report were either the result of direct targeting, mistaken identity, ‘collateral damage’ or ‘as proxies when the real targets could not be found’. Almost all of those interviewed for the report asked not to be named, and most did not even file a case for the murder of their children through fear of reprisals. ‘With parents often too afraid to testify, even anonymously, it is likely that the actual numbers of children killed are higher than the 122 documented in the report’, states OMCT.

There has also been a sharp increase in the arrest and detention of children on drug-related charges since Duterte came to power, says the document, leading to the ‘overcrowding of detention centres where abuse, ill-treatment and even torture are rife. This increasingly brutal policy has spilled over during the recent COVID-19 related lockdown, with numerous children arrested for curfew violations, sometimes threatened with being shot and detained in dog cages or inside a coffin’.

The report’s revelations must be a wake-up call for the international community, which has been ‘largely absent as the Philippine government has kept trampling human rights’, said OMCT secretary general Gerald Staberock. ‘Over the past four years we have hardly seen any meaningful reaction to the wanton killing of thousands of people under the pretext of the “war on drugs”, the targeting of the poorest and most marginalised citizens of the Philippines, and the persecution of human rights defenders, many of whom are in prison for their legitimate work. It is the total lack of accountability that feeds the cycle of violence, including the war on children we are witnessing.’

How could they do this to my child? Extrajudicial killings of children during the ‘war on drugs’ in the Philippines at www.omct.org – read the report here