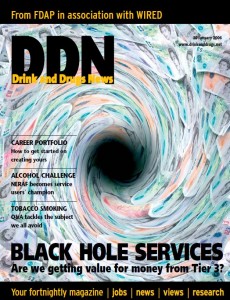 There’s a great deal you can’t do without money – but there’s a lot to be said for a ‘can do’ attitude. Kevan Martin (page 12) went further with a ‘must do’ approach to setting up NERAF, a forum for alcohol service users in the North East.

Kevan’s determination to go out and find service users before they leave treatment and spend years wrestling with the lonely reality of alcoholism – as he did – has given him the basis for an active and responsive network. The individuals and services who have helped him along the way, with ideas, support, use of a room – and all the small things that make a huge difference when you’re trying to turn an idea into practice – are testament to those who listen and respond to what’s needed by service users.

Alongside the inevitable frustrations about the lack of funding for alcohol services and refusal to recognise the escalating scale of damage to the nation’s health, there is a rallying cry to unite in influencing future planning. To be heard above the constant noise of the criminal justice system is going to take a clear and united message from alcohol services and service users throughout the country.

Why shouldn’t alcohol service users have a strong and co-ordinated voice representing groups around the country, in the same way that drug service users are participating in dialogue and contributing to the future direction of services? Alcohol Concern are, of course, right up there in the front line – supporting Kevan and other groups around the country and lobbying government for the crucial underpinning finance. With the deadline due now for responses to their ‘Spend £1, get £5 free’ campaign, to make spending on alcohol treatment a priority, there’s a reminder on page 6 to add your support while you still can.