Could a recent growth in crack cocaine use indicate its move to social acceptability – and how should we respond? Kevin Flemen examines the situation.

Read the full article in the June 2018 issue of DDN

Stigma-driven barriers between powder cocaine and crack may be breaking down. Increased availability of crack thanks to ‘county lines’, combined with increased demand and reduced stigma, could see a big upsurge in crack use. But are drug services ready for a growing population of dependent stimulant users?

‘They weren’t finding their coke use so rewarding anymore… so they’ve moved in to smoking crack.’

This observation by a participant in a recent stimulant training day echoed comments that have been coming up more frequently of late, and it made me very anxious. The users in question had been trades or construction workers in the Telford area. Historically this would have been a cohort who found powder cocaine highly acceptable but would have viewed crack cocaine less favourably. That they were migrating from cocaine powder to crack suggested not just changes in availability of crack, but also changes in attitude.

Crack cocaine has, generally, not enjoyed the same kudos and acceptance as cocaine powder. The stereotypes and assumptions – a highly addictive, ‘ghetto’ drug associated with crime, impoverishment and squalor – were on the one hand highly stigmatising. But on the other they acted as a buffer, as many people viewed cocaine powder as ‘acceptable’ but crack cocaine as a ‘dirty’, unacceptable drug.

Granted, there had always been those who didn’t subscribe to this simplistic view and there were a fair few North London types who used to drift in to Dalston to sample the dubious pleasures of a crack house before heading back to less edgy areas. There were numerous ‘Professionals Binge on Crack’ type stories in the media 20 years ago (The Guardian, 13 November 2000), but this didn’t translate to more widespread usage.

The drugs field too had more than a few of its own workers who believed that the demonisation of crack was unwarranted and that they were more than capable of handling crack or making their own freebase. Some fared OK, others less so.

These exceptions aside, the prevailing view of crack as a ‘bad’ drug would, once upon a time, have meant that the Telford trades workers mentioned earlier would generally not have gone near crack.

‘My brother works on a construction site and he’s in his forties. He’s just walked off a job because at the end of the day the rest of the crew are all sitting in the cabin smoking crack.’

On all recent courses I’ve been exploring the issue, and repeatedly, similar examples have emerged – established white working-class trades and construction workers who, finding powder cocaine less rewarding, are putting down the tube and picking up the pipe. But subsequent cases suggest that the issue is more widespread.

‘Some of my “friends” have been smoking rocks too. They were finding that their noses were hurting too much from cocaine, so switched to rocks.’

‘All the cool and edgy kids are doing it. They all go off to a room at the end of the evening or at parties and are smoking rocks. They’d been dipping cigarettes in cocaine and it moved from there.’

The first of these examples was a recently graduated social work student in Staffordshire, and the second related to the artist community in increasingly-gentrified Hackney Wick. They highlighted to me that the increased access and acceptability of crack was resulting in take-up across a range of different social settings.

Availability of crack has increased at least in part because of the ‘county lines’ phenomenon, and we are seeing crack markets emerging in areas where it had previously not been a significant issue. These markets had, however, often piggy-backed onto existing opiate markets – expanding market share by offering two-for-one deals or mixed ‘any five for £30’ offers, where the buyer could have four rocks and a bag of heroin for the comedown, or three bags of heroin for an opiate habit and two rocks as a ‘treat’. 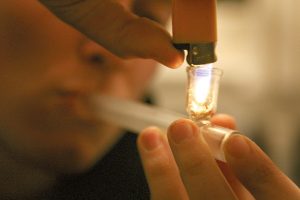 This expansion into existing heroin markets is, of course, in itself problematic. Experience says that the stability and health of heroin users often markedly deteriorates when they add crack to their repertoire. Treatment requirements change dramatically and engagement can be more difficult. But my tacit assumption was that the size of the market for crack was limited by the size of the heroin market it was latching on to. The stigma relating to crack in the past had offered a degree of protection.

What, then, if that stigma has been significantly eroded? What if even just 10-15 per cent of our existing cocaine users start to migrate to crack use? How big would that population be, and how well set up are services to identify and respond to it?

Stigma is of course a double-edged sword. It may well in the past have deterred people from using crack. But that stigma also reduced access to services. Some activists in the field, such as Mat Southwell, argued that ‘the demonisation of the drug and its users has fostered the belief that crack cannot be managed.’ Offer empowerment and tools for control and we could change behaviour went the argument: http://www.drugwise.org.uk/wp-content/uploads/More-than-a-pipe-dream.pdf

Others, such as Peter McDermott, writing around the same time challenged this model and the prospects of ‘managed’ crack use for the majority of users: http://www.drugwise.org.uk/wp-content/uploads/Crack-harm-reduction.pdf

So it will be interesting to see the extent to which the current cohort of asset-rich crack users, unencumbered by the mythos of crack as an unmanageable drug are, in fact, able to manage their crack use – or if it spirals out of control.

If, as I fear, we are starting to see an upsurge in crack use which sprawls beyond a core demographic, services are going to have to get ready and, fast. In 2003/4, when the government and the NTA saw growing levels of crack use as an issue, resources were put in place, regions and agencies were encouraged to develop stimulant strategies and some areas appointed lead workers to address the issue.

Although levels of crack use increased, the feared ‘crack epidemic’ never materialised as envisaged and these strategies gradually got subsumed by other agendas and strategies.

If, as I suspect, we are going to see a marked increase in crack presentations, the useful aspects of these strategies need to be exhumed and brought up to date. We also need to learn what didn’t work and not repeat these mistakes.

As there is currently no model of substitute prescribing for crack, some workers feel disempowered and people with crack dependencies may feel that there is little on offer for them. Services therefore need to ensure that through training and resources, staff are empowered to respond confidently to people presenting with crack dependency.

Regionally, outreach, GP liaison and arrest referral will be useful in determining the scale of the issue locally. As this nascent crack using population aren’t currently injecting or heroin-using, they won’t automatically have contact with drug services via, for example, needle exchange.

Harm reduction interventions, including resources to address the needs of crack smokers, polydrug users (including crack and alcohol, use of opiates or benzos as comedown drugs) and crack injectors need to be in place. Drug-related deaths strategies should also address responses to critical incidents involving crack, including the need for rapid ambulance attendance and CPR.

Services need to ensure that they have the capacity to deliver a rapidly accessible service to clients in chaos, who may need numerous brief interventions over a short period of time. Structured, evidence-based day programmes, craving management interventions, and healthcare to address physical and mental health problems stemming from crack use, need to be in place sooner rather than later.

It’s always risky pressing the button marked ‘crack problem’, as it’s been pushed too often. But I’m probably more anxious about crack this time around than I have ever been working in the field. I hope I’m wrong.