The Home Office has produced a series of posters to help staff working in social housing identify potential victims of county lines activity and report their concerns. 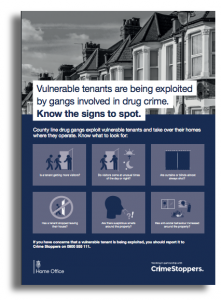 The number of potential modern slavery victims reported to the authorities has risen by more than 80 per cent in the last two years to just under 7,000, according to the National Crime Agency (NCA) (DDN, April, page 4). The numbers of British citizens and minors referred doubled between 2018 and 2019, both partly the result of exploitation of young people by county lines gangs.