‘Life was shit. I would rob Peter to pay Paul. I’d cry every day and was at rockbottom, living on people’s settees, doing drugs whenever I could.’ ‘Julie’, Middlesbrough, 2020

If Julie was living in middle class society in Britain before the 1960s she might have been prescribed heroin for her addiction problem. Until the Dangerous Drugs Act of 1967, this was seen as a suitable treatment, but overprescribing by doctors and diversion to illicit markets changed all that.

The preferred treatment became newly developed oral methadone – a more comfortable option for doctors and clinics to prescribe, as it was specifically for ‘addicts’. Via the Misuse of Drugs Act 1971, heroin became class A – among the most ‘dangerous’ drugs.

The new wave of heroin use in the ’80s spread throughout Europe, accompanied by the spread of HIV and AIDS. While Britain was an early adopter of harm-reduction measures including needle exchange, oral methadone was established as the main form of maintenance prescribing.

Approaches in other countries

Switzerland tried a different approach to harm reduction, and in the early 1990s the government allowed a new heroin assisted treatment model – HAT. The idea was to offer a reliable supply and clean injecting equipment, and to combine it with healthcare and access to services. The medical grade heroin was seen as the best incentive to engage people with treatment.

The first Swiss HAT clinics opened in 1994 as part of a three-year trial, which was then expanded with public support. Participants’ health was found to have improved significantly – and crucially for the viability of the project, their criminal activity had decreased, giving net savings on the cost of their treatment. Members of the public were keen to see the programme continue as it reduced drug use on the streets, while medicalising heroin had the added benefit of reducing its appeal to young people.

By 2009 Germany and the Netherlands had conducted their own trials and included HAT in their health systems. A German study showed significant long-term improvements in mental and physical health after two years, and the EMCDDA concluded that HAT could lead to ‘substantially improved’ health and wellbeing.

A decade later, the year-on-year increase in drug-related deaths has prompted the UK to reconsider the evidence. At the RCGP/SMMGP conference in January, Dr Saket Priyadarshi explained that HAT had been incorporated into Glasgow’s new Enhanced Drug Treatment System (EDTS).

‘We’ve been making the case for a long time without getting traction politically,’ he said. The game changer had been an outbreak of HIV, where the common factors were injecting heroin and cocaine in public spaces. A report, Taking away the chaos, led to a formal health needs assessment and brought in the international evidence – and among the recommendations were safer injecting facilities and HAT.

The drug consumption room immediately stumbled into difficulties over its legality – ‘we needed to make a case for it within the existing legal system’, which involved talking to Westminster. Meanwhile the drug-related deaths crisis was escalating, so an interim plan looked at implementing HAT.

‘We wanted to show we were offering a whole range of interventions, not just HAT,’ said Priyadarshi. ‘So we based the service in Glasgow city centre in the building of a homeless service.’ It was refurbished to be ‘clinically effective’ and to also ‘reassure the Home Office that we were running a professional and safe service’.

Referrals came from the homeless addiction team and the criteria related to real life, he explained, unlike the stringent criteria of the RIOTT trials, which required being abstinent –‘we wouldn’t be able to recruit a single person!’.

With a pre- and post-injection assessment, injecting takes place twice a day in one of four booths. Crucially, while they are there visitors are offered injecting equipment, wound management and naloxone. In the pharmacy at the back of the EDTS, the controlled drug cupboard is operated by fingerprints and monitored by CCTV, and there is a research and evaluation programme running alongside the service. ‘We’ve gone overboard to show we have safe procedures,’ he said.

The first patients – all with ‘severe and multiple disadvantages’ began treatment last December. Their two doses a day at 300mg-400mg have achieved stabilisation, during which they were introduced to wraparound services, including the BBV and mental health teams. Their immediate health and welfare needs were assessed, with the offer of help with everything, from housing to looking after their toenails.

Outcomes evaluation so far shows a ‘very promising treatment option’, particularly for people who have been going in and out of prisons and hostels for years.

Also, crucially for its chance of sustainability, it shows that the service has already recouped the spend through saving on hospital admissions, multiple arrests and all the other costs that accompany a ‘complex needs population’.

Meanwhile the North West of England is equally desperate to change its reputation of having the highest number of drug-related deaths in England. At the end of February, a team from Middlesbrough proudly announced ‘life changing’ early findings from their 12-month pilot HAT programme, which has been running since October 2019.

Twice a day, seven days a week, the 11 participants come to a facility at the GP practice to inject a dose of medical grade diamorphine, under the supervision of trained staff. They are then offered access to a range of support services.

‘It wasn’t about selecting this cohort and setting up a separate centre for them, it was about how can we include these guys in a programme that has failed to benefit them historically,’ clinical lead Danny Ahmed told DDN.

‘We felt that heroin assisted treatment and its strong evidence base was a key way to start work with this difficult to reach group.’ Putting the clinic in an existing treatment service gave participants the opportunity to engage with all the partner organisations within the medical practice.

‘One of the anxieties we had was that the individuals we approached were leading extremely chaotic lives with very little structure, and we were asking them to adopt a very structured life,’ he said. The team’s worries were allayed – the attendance rate has been 99 per cent. And because they were there every day, they have been able to help them with leg ulcers and other chronic health conditions.

Some of the participants were street homeless when they joined the programme, but have now had support to get into accommodation.

All of the participants have reported improvement in their own perception of their health and wellbeing. Ahmed has known some of them for 20 years while working in substance misuse in the area and is ‘privileged to see the progress’ as they physically change. ‘They look brighter, they’ve gained weight, they’re starting to look really, really well.’

The cost of the medication is around £5,000 per person per year, and PCC Barry Coppinger, who actively supports and joint-funds the project with Foundations Medical Practice, Durham Tees Valley Community Rehabilitation Company, Tees and Wear Prisons Group and South Tees Public Health ‘would love to see the scheme rolled out to the other boroughs in Cleveland’.

He compares this cost with the savings to the taxpayer. ‘The participants had committed 943 crimes that were detected at a cost of £3.7m – you can see how the arguments stack up in support of this scheme,’ he says. ‘So we’re hopeful that we can continue to make progress, and I’m going to use the proceeds of crime income that I get from seizing assets from criminals to underwrite the scheme as we go forward.’

‘I continue to be impressed with the overwhelming change in our participants in such a short timeframe,’ says Ahmed. ‘The majority have battled addiction for decades and they are finally able to lift their heads out of the daily struggle of substance use and look forward to living life.’ DDN

When I got the phone call to be on the programme I refused first of all. I thought it would be like another methadone treatment – get put on it and then 15 years down the line still be on it.

I was a big shoplifter and doing a lot of drugs – I just thought it wouldn’t work. I just can’t believe how quickly it has worked. I don’t touch the heroin at all, and I was doing it for 20 years.

This course has given me a life. I have disrupted my kids’ lives a lot through the drugs, and my husband’s life. This is my last chance and I know I’m on the right path.

This by itself wouldn’t have worked but everything with it, it’s working a dream. It’s not just the two doses a day – it’s much more than that. The nurses who are there with us, you can speak with them anytime and it helps a lot. They’re there with you.

At first it was scary for everyone, but now we all work together, it’s a team. This is just the beginning – I’m not even close to being recovered yet. It’s a scary little ride that I’m on, but I’m strapped in.

I never went without drugs since 1999. I spent a lot of time in jail, but I still used in there as well. I came into this with a roll of the dice to see if it does work, because I’ve tried other things – all kinds over those two decades. I thought this can’t hurt, but I wasn’t really expecting it to work. But then it was just unbelievable, how different it is.

I used to shoplift to feed my habit. Before I started this programme I needed at least £40 a day to feed my addiction – £40 that I could sell it for, so I’d need £80 of stock a day. I don’t need to do that now. I’ve even had a security guard say to me that they’ve noticed the difference! 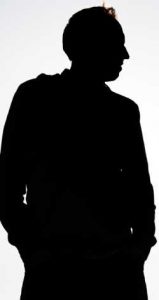 About 9 or 10 o’clock I’d run to the town, to Boots or one of the bigger shops for wash stuff or toiletries. I’d fill up a bag for life with as much stuff as I could and get out of that door, no matter who I had to push out of the way.

Then I was going to sell it, getting half price of whatever it cost in the shop. I’d go and get some more gear to get me over till the afternoon, then I’d head back into town again. I’d go somewhere for a couple of pairs of jeans, then to House of Fraser or Debenhams for a few of their Lacoste t-shirts. I’d go back out and sell them and that would get me to about teatime, and about five-ish I’d head back to town for the last half hour rush because everyone wants to get home then. This time I didn’t care who was there, even if there were staff, I’d fill up the bag in front of them and run to that door. I’d sell that stuff as quick as I could and that would be my night-time gear.

This might not work for everyone, but it’s worked for me and for the other people on the programme. There’s not many of us on it but it’s the chance of a lifetime and you can see the difference in everyone. I hope other people can have the chance I’ve been given.

This article has been produced with support from Ethypharm, which has not influenced the content in any way.